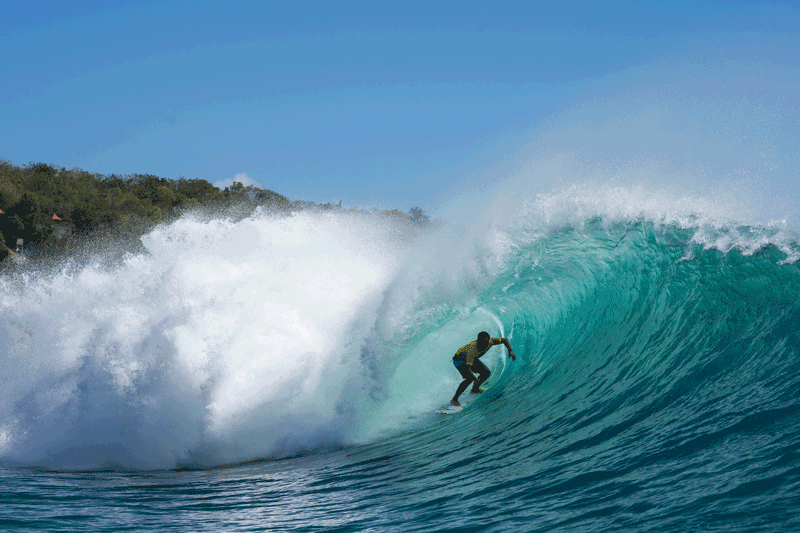 It was sweet redemption for the 30-year-old Kuta Beach surfer and former Rip Curl Cup Finalist, after narrowly missing out on qualification during last year’s Trials at Padang Padang, when he was eliminated by Uluwatu local Agus “Blacky” Setiawan on a wave before the buzzer.

“This is the first time I’ve had to qualify for the main event through the Trials and it actually feels amazing,” said Rondi, who used to be a perennial invite to the main invite. “Padang Padang is the proving grounds for all Balinese surfers. I’m glad the young guys get a chance to get into the main event through the Trials and I’m happy that I proved I still deserve to be here.”

In the Final, it was Rondi who stole the show and first place, threading a pair of deep barrels through the inside double up section before getting spat out into the channel, and earning a combined heat score of 13.40. En route to the final, Rondi also scored the highest heat total of the day (14.66) in his Quarterfinal 2 heat. Pressuring Rondi and finishing runner-up in the Final was Bingin local Agus “Dag Dag” Sumertayasa, 25 (12.60), who earned his first-ever invitation to the main event. Finishing in third place was Uluwatu’s Koki Hendrawan, 27 (9.73), and in fourth place was Kuta local Mustofa Jeksen, 31 (8.33).

All four finalists earned berths into the Rip Curl Cup main event. They will join the Top 4 placing locals from last year’s Rip Curl Cup, Agus “Blacky” Setiawan (runner-up in 2018), Bol Adi Putra (3rd place in 2018), Mega Semadhi (4th place in 2018), and Garut Widiarta (equal 7th place in 2018) to represent Indonesia and compete against the world’s best tube riders at Padang Padang on the best day of spitting barrels between 1st-31st of July.

The complete list of 16 invited surfers will be announced at the Rip Curl Cup Opening Ceremony on Sunday, 30th of June.

“This will be my first time surfing in the Rip Curl Cup main event,” said an elated Agus “Dag Dag” Sumertayasa after being chaired to the beach by the Bingin crew. “I’m so happy to be in this event and to be able to represent my home break, Bingin. I want to win this contest for all the Bingin boys!”

“I’m honored to make it back to the Rip Curl Cup,” said Mustofa Jeksen, who also qualified through the Trials last year. “That’s always the goal every year, to surf against the best here in Bali. I’m proud of all the local boys who came out today and went for it out there.”

For the four finalists, the Final round was just the icing on the cake after a full day of draining barrels and securing their spots in the most prestigious surf contest in Indonesia. According to Event Director James Hendy, this year Rip Curl once again made certain all the best local surfers would get their shot at Padang Padang by giving the Trials holding period an impressive eight-week window – four weeks longer than the holding period for the main event. They needed every last day to catch Friday’s epic swell at Padang Padang, which arrived with just two days remaining.

“We gave ourselves a two-month window to make sure the locals had their day at Padang Padang, and we used every last day of the window,” Hendy said. “But Padang Padang came through when we really needed her and the locals were rewarded for their patience with the best Padang Padang we’ve seen so far this season. We’re all looking forward to another day of incredible barrels when the world’s best tuberiders are here for the main event this July.”

The holding period for the 2019 Rip Curl Cup runs from 1st – 31st of July, a full month during the peak of Indonesia’s prime swell season, providing the event with the best odds of scoring the cavernous jade barrels the Balinese Pipeline is world-famous for.

Foreign tourists should be better informed of Bali norms, APPMB

Image: The image that went viral. Credit Instagram @dreamchaser_travelling. The Bali Tourism Alliance (APPMB) spoke out yesterday after an...