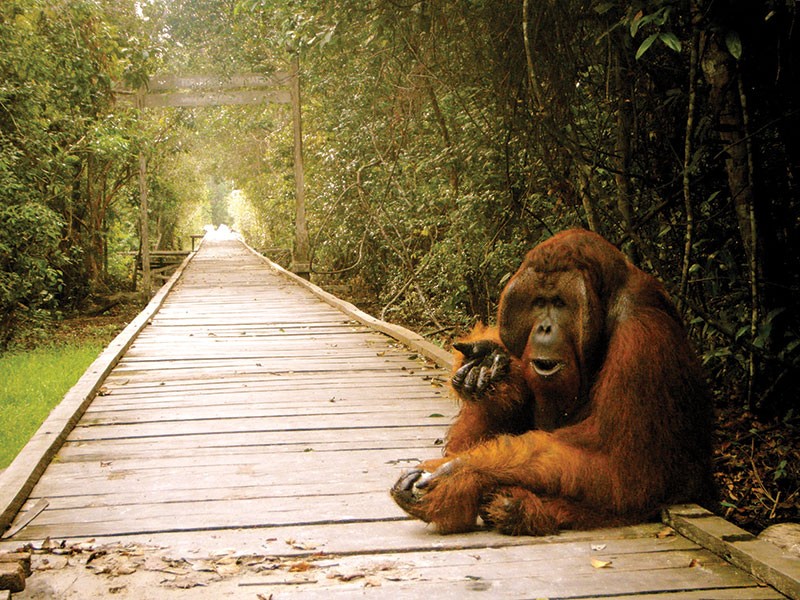 Indonesia’s expansive part of Borneo is definitely hard to get to, but oh boy, is the effort worth it! Live aboard a houseboat, navigate the river canals crisscrossing the dense jungle of the Tanjung Putting National Park, meet our third closest relatives and so many other critters, sleep under the starts – this whole trip is like living in the National Geographic documentary.

We set out to Kalimantan to explore the Tanjung Putting National Park, famous for its Orangutan conservation. Getting there was quite an adventure in itself. We first found ourselves in Pontianak – gritty, sprawling capital city straddling the equator, known for its rather bizarre equator monument. We crossed the massive delta of the Kapuas river to check it out during our layover, but we do not think you have to. The next day we hopped on a tiny aircraft – it literally only seats 10 passengers, and left for Pangkalan Bun, the gateway to the National Park. 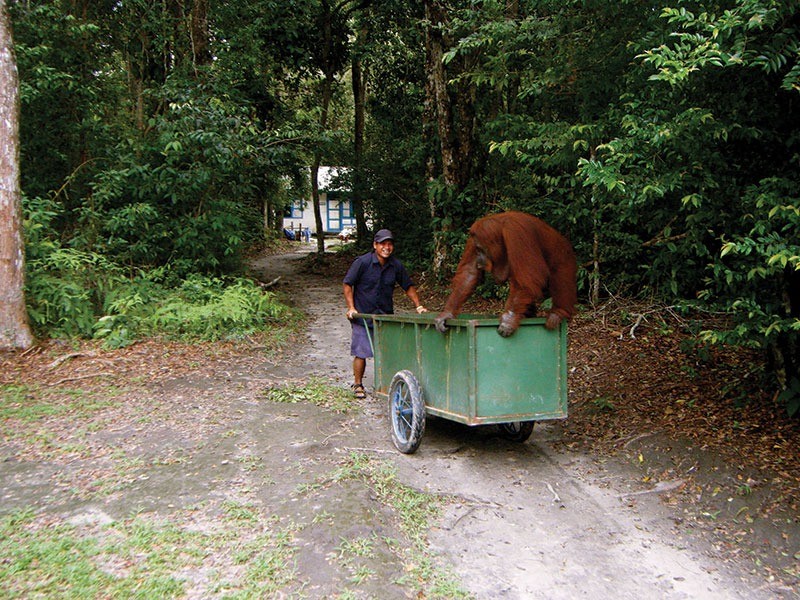 What really drew us to this park was the fact, the only way to explore it is on a multi-story, ramshackle liveaboard boat called Klotok. You rent the whole ship through one of the many operators in town, including a whole crew plus your own cook and set sail. They offer multiple packages and we recommend you definitely opt for a minimum of four days. Spoiler alert: the park is so packed with natural wonders and is teeming with wildlife, you’ll soon wish your tour wouldn’t have to end after just a couple days.

Sailing and living on a boat is just as fun as it sounds. Look, do not expect five star luxuries, it’s not a Caribbean cruise and the amenities are pretty basic. It does however have a certain “rustic” charm to it – you wash yourself in an outdoor shower with the water pumped straight out from the river and sleep on the upper deck on a mattress covered with a thick mosquito net. This might sound rugged, but boat-camping under the stars and falling asleep listening to the crickets and other sounds of the jungle is a profound experience you’re not likely to forget. 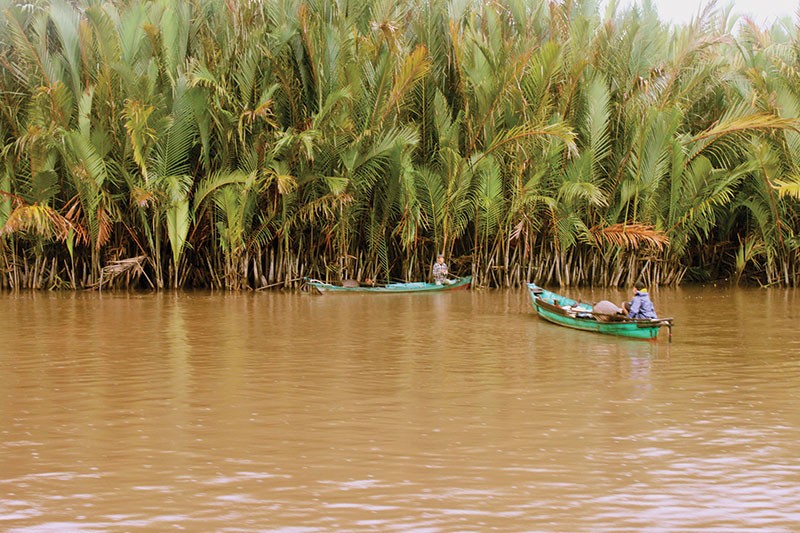 The first inhabitants we spotted instantly were acrobatic Proboscis monkeys with their funny, unusually long noses and interesting reddish-brown coats. There is also a plethora of colorful birds big and small, and we encountered many Toucans along the way.

The major attraction here are however the big guys! Seeing the apes in the wild in their natural habitat feels nothing short of mind blowing. As you cruise on the canals of the National Park, you make stops along the way and hike into the jungle to the feeding platforms. The best time for Orangutan watching is dry season, when they are more likely to come out for a supplemental source of food.

We lucked out big time and at each stop throughout the park, the primates would always come hang out. The guides would place the food consisting primarily of bananas on the wooden platform and would start calling on the apes. I will never forget the moment the branches high up in the forest canopy started rustling and bending down under their weight – a big family with multiple Orangutan babies was coming. The first thing that struck me was how similar to human babies they are. We after all share 97% of the DNA with the world’s largest, tree climbing mammals. 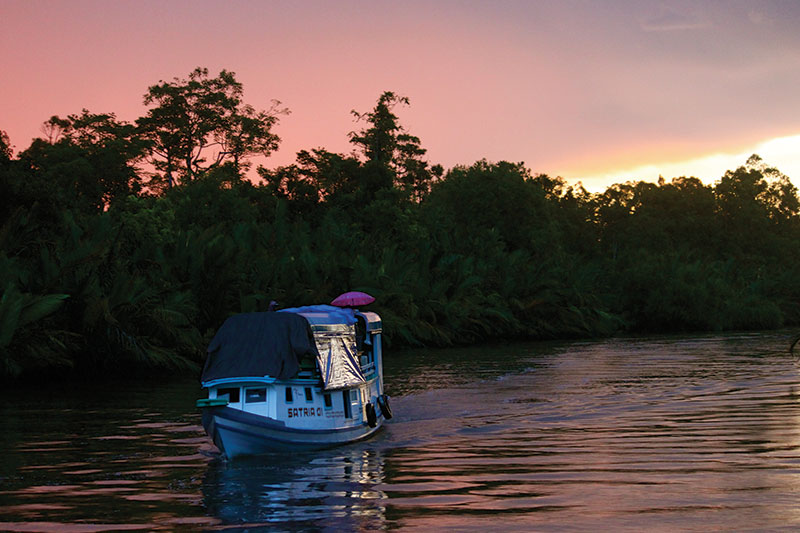 The most intriguing stop on the tour was the legendary conservation Camp Lakey where anthropologist Birute Galdika lived for over thirty years doing groundbreaking research on the “gardeners of the forests” as the primates are dubbed for their vital part in the rainforest ecosystems. Prior to her explorations, little was known to scientists about this fascinating species. We spent the whole day there wandering around, meeting rehabilitated Orangutans and geeking out about them with the rangers. We even met the king of the jungle, the alpha male of the pack of absolutely epic proportions – he looked like a furry Mini Cooper.

No wonder this story book adventure has a world-class appeal. Despite the increase in popularity in recent years, the trip is still a magnificent introduction into the rainforest ecosystem and one of the most memorable experiences you’ll have in Kalimantan. 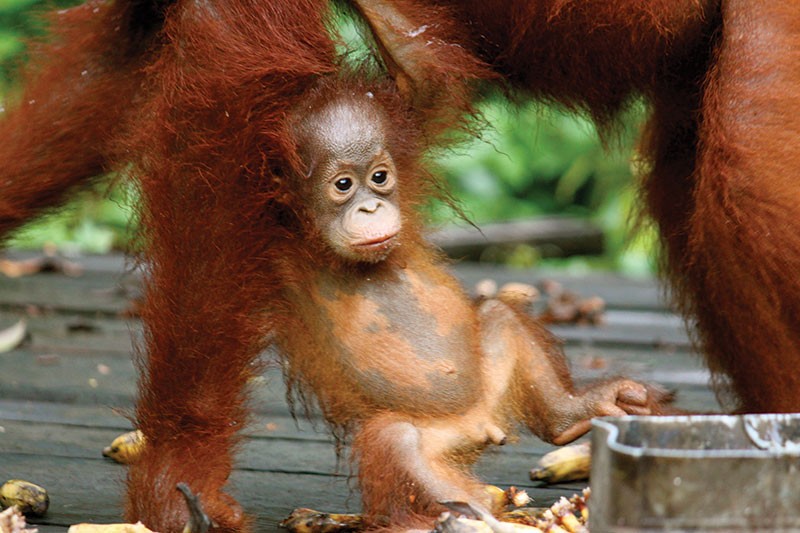