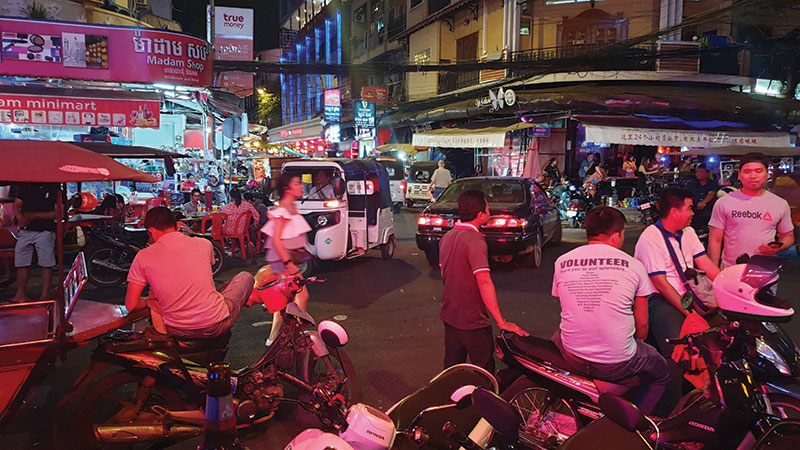 A Few Days in Phnom Penh

Cambodia has come a long way in the past few years. After being brought to its knees and sent back to the equivalent of the dark ages by the Khmer Rouge (tyrannical communists that took over the country from 1975 to 1979), it has taken many years for Cambodia and its capital Phnom Penh (PP) to get back on its feet, but they have. Today PP is a bustling and thriving populous. Skyscrapers are going up fast and optimism is in the air. Last year Cambodia had the highest economic growth rate in all of Southeast Asia, but the city still has a quaint, big country town feel for the moment, which for me, is its special charm. Let alone the price of a beer!

Toot Toot! Tuk-tuks should be mandatory in every urban area around the world. The motorbike driven bemo tucks and weaves through the traffic quick, getting you to your destination in no time. What a fun way to get around town and nowadays Grab has also gotten into the act and put tuk-tuks on their app. For 1 or 2 dollars you can get just about anywhere in the central district. It may be a different story in winter, but during the dry season, which had just started before we arrived, it was a wonderful way to get around and see the sights. Another option is walking. The grid-like town planning of the mostly tree-lined streets is ideal for a stroll. The tropical heat may wear down the frail, but a walk along the riverside promenade, past the palace, and meandering your way north to Central Market for example is not to be missed.

During the day, visitors have a handful of sightseeing options. The genocide museums; the Killing Fields and Prison S21 are must-visit locations to get an up-close and sobering look at what man can do to fellow man under very wrong conditions. The top two markets, Central Market, which features classic, art deco, French design and then in the south, the Russian Market are both great spots to find a bargain. Shopping is generally pretty good in the malls and markets, and with a lot of clothing being made in Cambodia for export around the world, there is some good stuff to be had at very reasonable prices. The National Museum and the Palace are also worth a look for a touch of Cambodian and Khmer history.

There are restaurants of all styles and cuisines everywhere you look in Phnom Penh. However, it would appear breakfast is not so important for Cambodians as most breakfasts we had, both in the hotels and on the street were rather ordinary, except one place, a French fine-dining bistro called Khmer Pasteur. There you can get one of the best brunches ever for $11.90++ per person. The local Khmer cuisine was excellent, too. Highlights being the Amok, which is a popular local fish curry, traditionally presented in a bamboo leaf boat with a custard-like curry mix – very tasty when you manage to find an authentic one. The meat and seafood steamboats are also very tasty and sour soup and other Khmer curries are also winners.

Nightlife, and the booze in particular, are also the big winners in PP. Try Bassac Lane in BKK1 for the fashionable, pint-sized cocktail bars, all about the size of a shoe box and offering certain drinks and décor styles in each. It’s a very cool spot. Standout bars: White Rabbit, Harry’s and Hub Street. The old school, Wild West-style Phnom Penh night scene is still alive and well too. Get a few cheap beers and cocktails while watching the world go by is a must on Street 136 in the Riverside area. Try some of the hostess bars for a giggle too. The whole area of Riverside is full of bars, restaurants and rooftops. One in particular, Juniper Gin Bar on top of Point Hotel, has great views and equally impressive cocktails.
I don’t think I have had so many cocktails in my life as that trip to Phnom Penh. Probably because the alcohol is so inexpensive compared to Indonesia. $US5.00 will get you an excellently crafted cocktail in the fanciest bar in town – now that’s value. No wonder there are so many middle ages dudes hanging around bars in PP. Could be one of the reasons, anyway. The drinking in Cambodia is top level and top shelf all the way. As I’ve said to friends since returning, Phnom Penh would be a great place to wind up a drunk.

Citilink flies direct to Phnom Penh from Jakarta three days per week. The cost for return from Bali is around Rp 2.5 million. 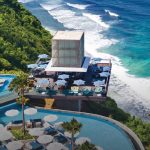