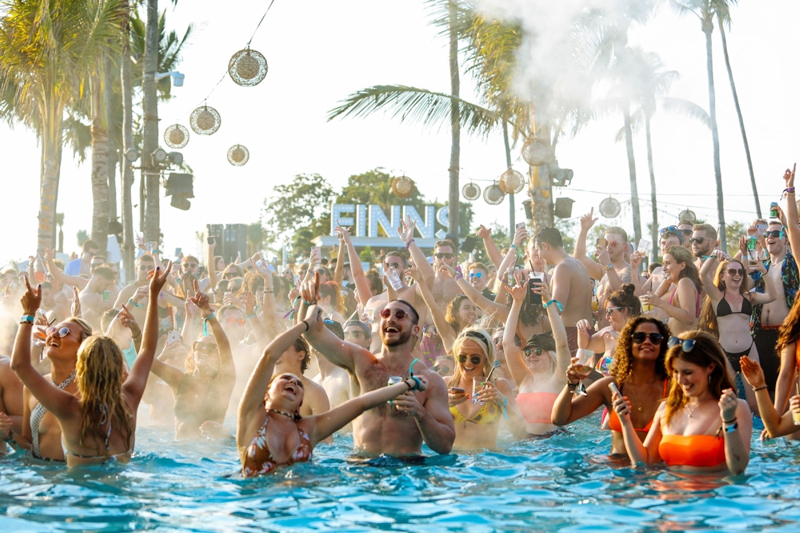 Bali is Well and Truly Back This Weekend

This weekend is probably the biggest weekend in events since the Sunday night before Covid stopped everyone in their tracks. I do recall that Sunday night (March 15, 2020) going out big time for the heck of it, with no particular reason, just going out. It must have been an unconscious connection with impending doom.

It started early around sunset at 707 beach bar meeting with some friends, then after picking up a dancer friend of mine from her kost, going to a packed Da Maria before later heading to ShiShi, where they owed me a bottle for some now forgotten reason, which we knocked off in grand fashion. It was a great finale to a world that probably needed a shake-up, but we had no idea it was gonna last sooo long. The next day the place closed down, the dancer ended up in Palembang or somewhere soon after, and we all ended up being put on hold till possibly …..this weekend.

Today starts off with Lil Pump, who appears to be a lil punk, but an entertaining one at that. He’s on at Mrs Sippy later in the early evening. You could make a day of it at the Sippy day club, soaking in the rays and good times. Another place you could do that today is Finns.

Finns Beach Club is celebrating a 6 year anniversary today with a huge event, including heavyweight DJ producers, Dombresky and A-Trak. The World’s Best Beach Club (as they call it) is sure to be busy, packed to the rafters with tourists and locals alike. I recall Finns had all kinds of PR issues with the neighbours when they first opened six years ago, but that it is well and truly in the past now, or maybe just moved down the beach to The World’s Biggest Beach Club (as they call it) next door.  Atlas has also been dogged with PR issues since well before opening and continuing till now. Loud sound late at night seems to be the issue at this point. But like all good entertainment the show goes on and we expect that all those issues will work out favourably in the end for all involved too. But I digress.

It’s all about this weekend’s entertainment.

Rip Curl will be celebrating their annual Rip Curl Cup After Party this evening at Ulu Cliffhouse with a whole bunch of local hot DJs including Scotty Cal, Shammui, Raff Track and Josh D providing the tunes. Not to be missed for all the surfers on the bukit.

You can catch some live music at Shady Fox, Ryoshi and The Orchard tonight if that is your thing.

Befores is on at our place Kasera from 8 till after 12 then the clubs fire up with a big shows tonight, Red Ruby has Irishman Dee Montero and in Canggu Vault is presenting UK DJ Radio Slave. Jenja is back open this weekend and it’s all Underground, sound that is.

There is plenty on tonight.

But just quickly, tomorrow night watch out for the Kuta Social Club grand Opening with special guest DJs Shiralee Coleman and Fuel, then Sneaky Sound System’s last gig of their season at Mrs Sippy in the early evening. Or it could be well worth getting up to Ubud on Saturday to dance the night away in the jungle at Kabana K Club Ubud – ahh wasn’t their grand opening a grand night last week!

Cheers, let the good times roll. Have a great weekend in Bali.