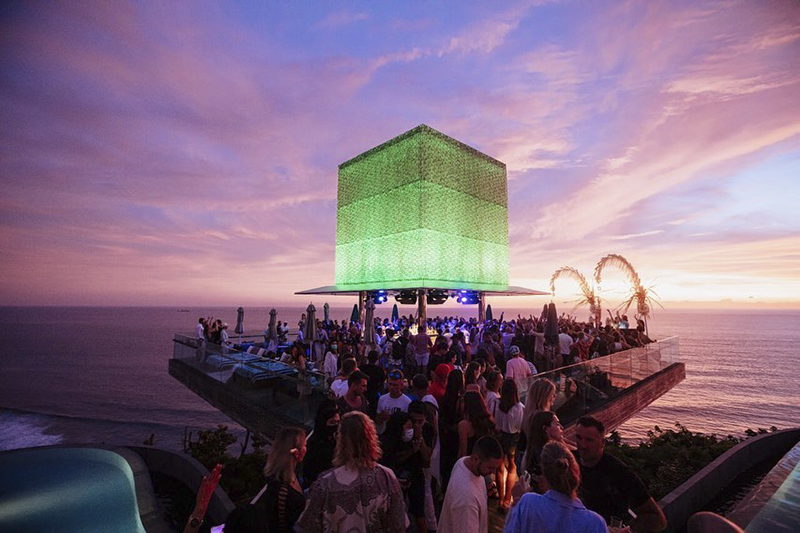 Bali Nightlife is back and on track

Since things are getting back to normal, and tourists are now coming back to the island in droves (no kidding it’s getting crazy) the Bali nightlife has come out of the darkness from the closed doors of the pandemic to re-open in almost its former glory all over town. No more checking your phones in at the door or entering thru the back entrance, those days are over, everything is now back to normal.

So what is the new state of affairs? I will keep this brief and update it when I can.

Where do you go out nowadays? Well, that would depend on what style of entertainment and nightlife you are looking for. A lot of people now are into the day time beach clubs and bars along the Bali coasts more than late night clubs etc. Most of the big beach clubs are now back open and pumping out the good times day and night (until 10pm or 12 midnight).  Savaya (formerly known as Omnia) on the south coast is still the must-visit location with international and local DJs, great service, drinks, and for a clientele who like to see and be seen. (Now open seven days. 1pm to 10pm). Ulus Cliffhouse and Single Fin are not far away, but looking west near Uluwatu so they catch a bit more of the sunset.

Closer to town you can try the casual and very popular beach bar La PLancha and their multiple neighbours on Seminyak beach, or Kudeta; a mainstay in Bali food, style and tunes for the past couple of decades, the new Mori, and the more casual beach bars nearby like 707, Il Lido on Batubelig beach. Further up in Canggu, Finns Beach Club, LV8, and The Lawn. The new Atlas Beach Club right next to Finns in Berawa opened in July, with some loving it and others less enthusiastic about the enormity of it. Perfect for people who like banging EDM by the beach.  Echo Beach area has a few casual bars on the beach and further north near Pererenan beach some nice bars have popped up recently including Shady Fox. All along the coast from Jimbaran, Kuta, Seminyak there are plenty of small beach side bar options mostly with cheap, cold beers, but most get quiet after sunset.

The nightlife proper still starts around midnight in Bali clubs but some venues managed to get some punters in earlier.

Petiteneget has taken off right from where it stopped in March 2020 and is still the main area to hang out at night.

Some clubs like the three floor ShiShi in Petitenget offer freeflow drinks to entice an early crowd and it works. ShiShi is the home to commercial pumping music from EDM to Hip-Hop, so if that’s your style, it’s the place to be and if you’re early enough you might even get a free drink, too. Wednesday’s Ladies Night is the pick for girls (free drinks and food) and guys understandably hanging out to chase all those gals. Early till late.

Just down the road is the smaller club, Red Ruby, which has taken the mantle in recent times of being the house techno spot on the Petitenget strip. It does get busy with people who enjoy the underground scene and vibe. Some Wednesdays you may even catch The Beat spinning a few tracks there. After midnight.

Further along Jl Petitenget and down a lane Mrs Sippy is back in action and already bringing in the big stars for summer. Daytime.

Back up and across the road from Red Ruby is the Imani Rooftop which is super stylish and uber-chic spot with a view.  Hip hop features twice a month, but DJs on rotation other nights. They do have some good underground sounds too. I like this place. Sunset and some later parties.

Nearby is the more local based, Mirror, which plays nightly options of house, EDM, hip hop to trance nights. You would have to check their daily events list to find out which night is for you. After midnight.

Across the road is the new Shady Flamingo with top notch cocktails, DJs and vibe. It’s looking good. 7pm to 3am.

If you are into live music and especially live indo pop music you can’t miss Nineteen Lounge just up from Mirror. They have the best local bands playing mostly hits lagu lagu Indonesia (Indonesian hits). Early.

The Forge is up the road and around the bend. It’s a fun place with great food and drinks. Being owned by the same folks as ShiShi (and famed Sky Garden) you’re guaranteed a great vibe with DJs every night. It is also open 24/7.

Ling Ling’s, next door is still a fave spot for the younger crowd, with their waitresses in funky costumes and a real hip hop urban kinda feel. There are all kinds of offers every night to keep you entertained and fed. Early till late.

Right at the top of Jalan Petitenget you can find Da Maria which pumps the DJs from Hip Hop to house techno depending on the night. Also pretty decent Italian food. And further up and across the road the clandestine, recently renovated and enlarged 40 Thieves offers a cool and casual bar and club feel. From 11pm.

Back down to Jalan Kayu Aya, every night of the week La Favela is turning it on with hip hop through the main two floors of the venue while upstairs third floor is the house techno area. Great drinks can also be found on the third floor bar called Attica. La Favela packs a generally younger crowd in but all are welcome and seen in this fun and busy club. From 10pm.

Across the road is the mainly older crew’s Red Carpet which has a lot of sophistication and up-market carry-on with mainly 80’s style music. Early till late.

One of the kings in the Petitenget area has to be Mexicola. The Mexican resto turned nightclub has a great formula of fun, mostly older, mashed up tunes and flowing tequilas keeping the dance floor pumping seven nights a week. They have Bali nightlife style down to a T and packed every night with a full on tourist party crew.  Early till late.

The alternative clubs are further down the road, which can’t be missed, with people spilling out onto the streets every night of the week in all kinds garb. Flamboyant is a word that comes to mind in this area. Mixwell, Bali Joe, 66 Bar and more offer all kinds of entertainment, diversion and loads of fun for anyone that’s game. From 10pm.

Very good late night clubbing can be experienced on this road too. Opera or is it now called Obsession (a former name of venue on the same site) and The Warehouse have been the places to be after midnight and beyond with underground sounds going till very late.  Late.

There is plenty more going on in places like….. Canggu but we will get to that soon….