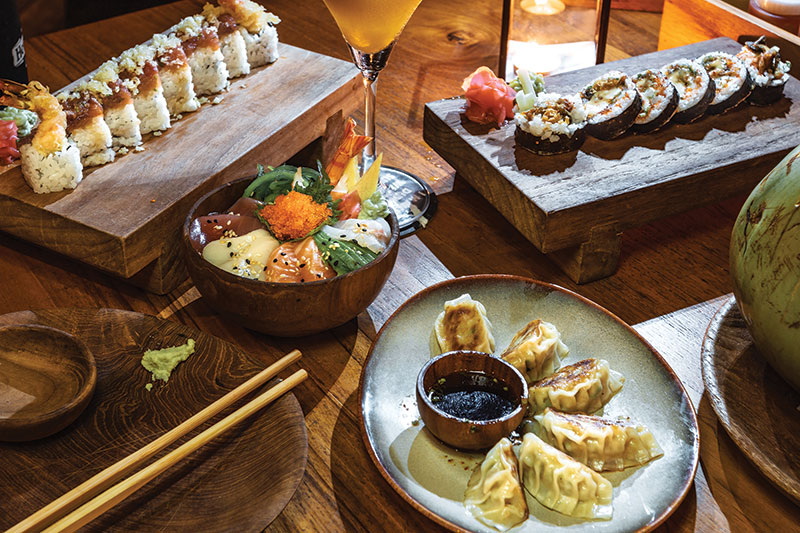 Finns Beach Club has been quite a phenomenon since opening on Berawa beach almost three years ago. (They will celebrating their third anniversary soon). Pumping with approximately 4000 people passing through the doors to enjoy the sun and good times every day, it just keeps on getting better and busier.

Besides the usual beachside fare, which you would expect at any beach club worth its salt, recently Finns lifted their dining game a notch or two with the advent of Japanese cuisine in the Sushi Bar. The Sushi Bar is sited at the back end of the restaurant area with a rustic, wooden Japanese design and features the freshest of sushi, sashimi, maki rolls, and uzusukuri, which is a Carpaccio style white fish sliced impossibly thin paired with a truffle ponzu sauce. Edamame, gyoza and yakitori are also available.

I couldn’t wait to give the menu a spin. 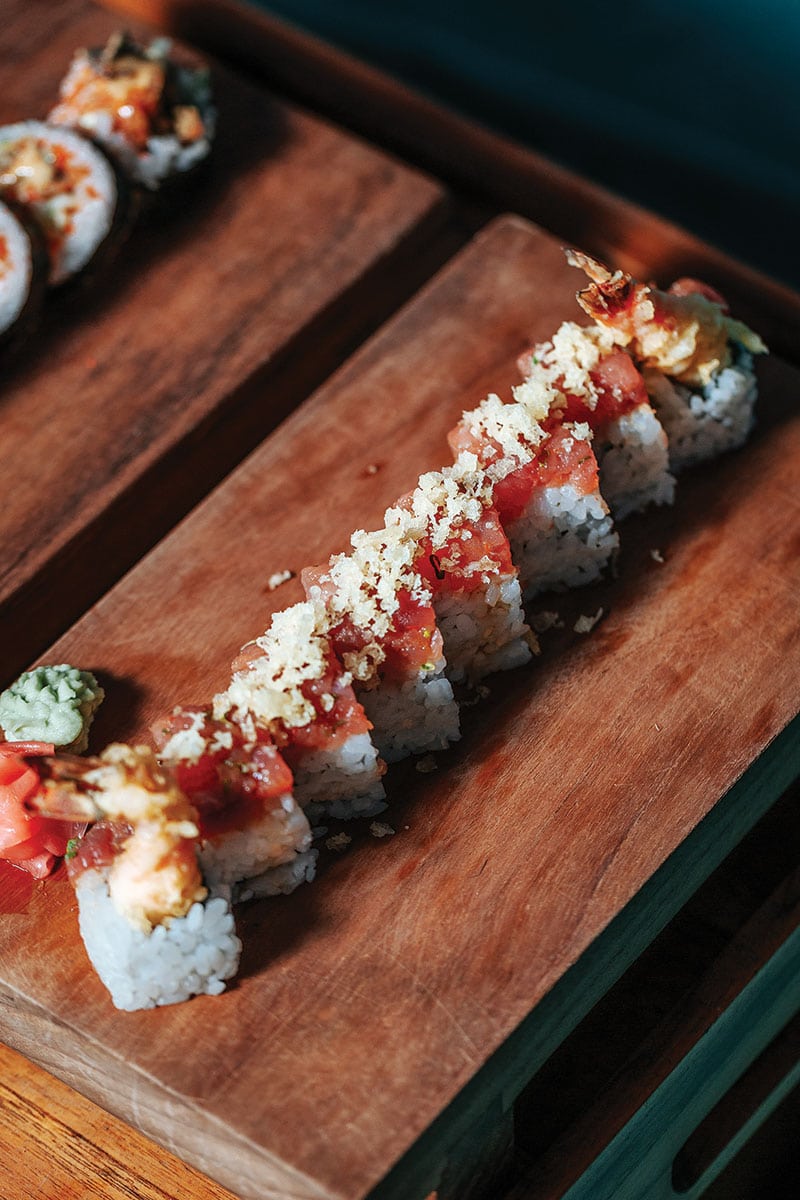 I sat down with my lovely companion. We’d been splashing around in the pool and enjoying some sun on a balmy (not so) wet season afternoon and now it was time for a feed. The sun was sinking to the west and fortunately the Sushi Bar is a little more protected from the sun’s rays than just about anywhere else in the club, which can be handy after a long time frolicking in the pool. The Japanese can also be ordered and eaten anywhere in the beach club.

I ordered an ice cold Bintang as the server placed the Japanese menu on the table. The menu is not enormous, but features all the best choices for a simple selection process to get you straight into the action. The Indonesian, Japanese chefs are behind the wooden bar, bamboo and alang alang above, slicing up the raw fish as my friend and I perused the menu.

We opted for some simple choices. Japanese food is by far the Rolls Royce of healthy cuisines and here at Finns it’s at its simplest and best. We chose the Gyoza (75k) – six pieces of soft chicken dumpling with a spicy ponzu sauce, and the Chirashazushi bowl (135k) – a bowl of seasoned sushi rice, sliced fresh salmon, butterfish, snapper, tuna, prawn, tobiko, tamagoyaki, avocado, wakame and nori served with pickled ginger, wasabi and sesame seeds. This bowl was such a winner and a meal in itself. The freshly ‘ground at the table’ wasabi is also a treat. 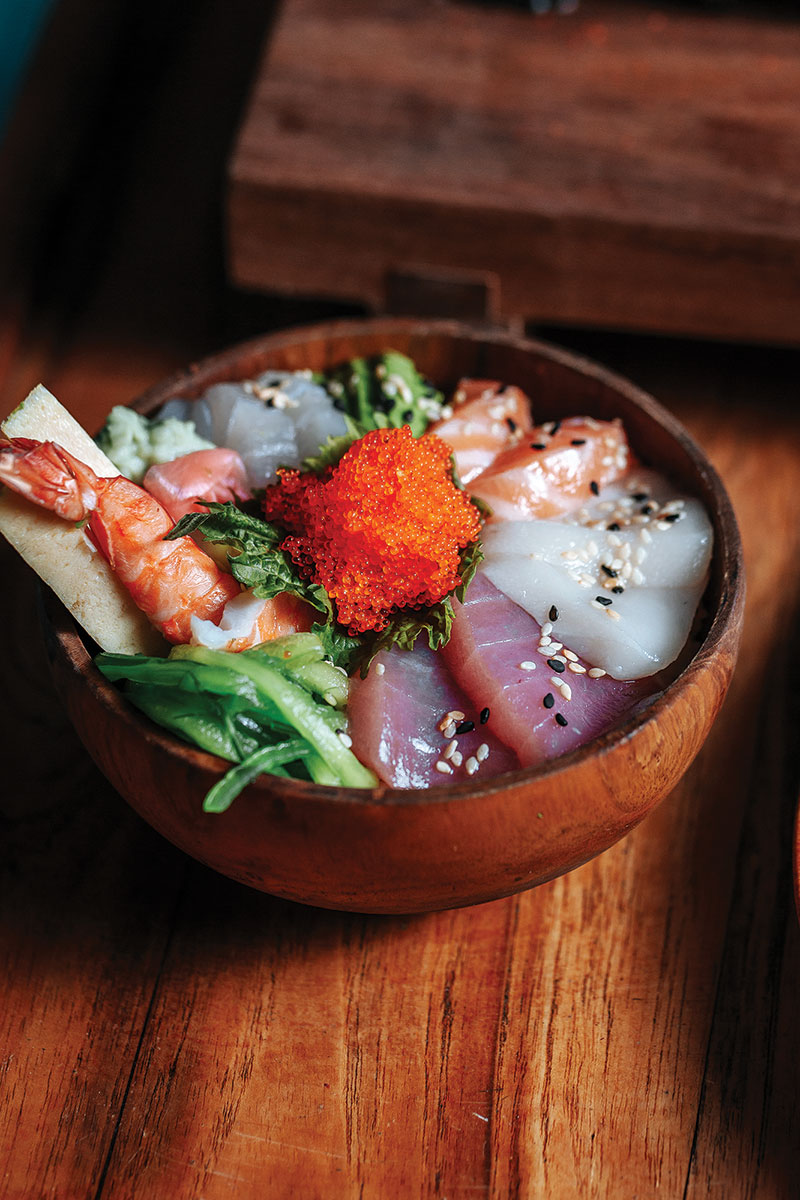 To complete the meal, we also chose a couple of maki rolls, one being the Sunset Roll (135k) – tempura prawn, cucumber and topped with spicy tuna, sesame, shoyu and tempura flakes, and then the Crispy Salmon Skin Roll (115k) – crispy salmon skin, cucumber, tobiko and teriyaki mayo. Both were crunchy, tasty and fresh as a daisy. We washed all this down with the perfect accompaniment, two cocktails (135k) – the fruity Frozen Berry Margarita and a rum and peach liqueur Chenola, and then more ice cold Bintangs (60k). 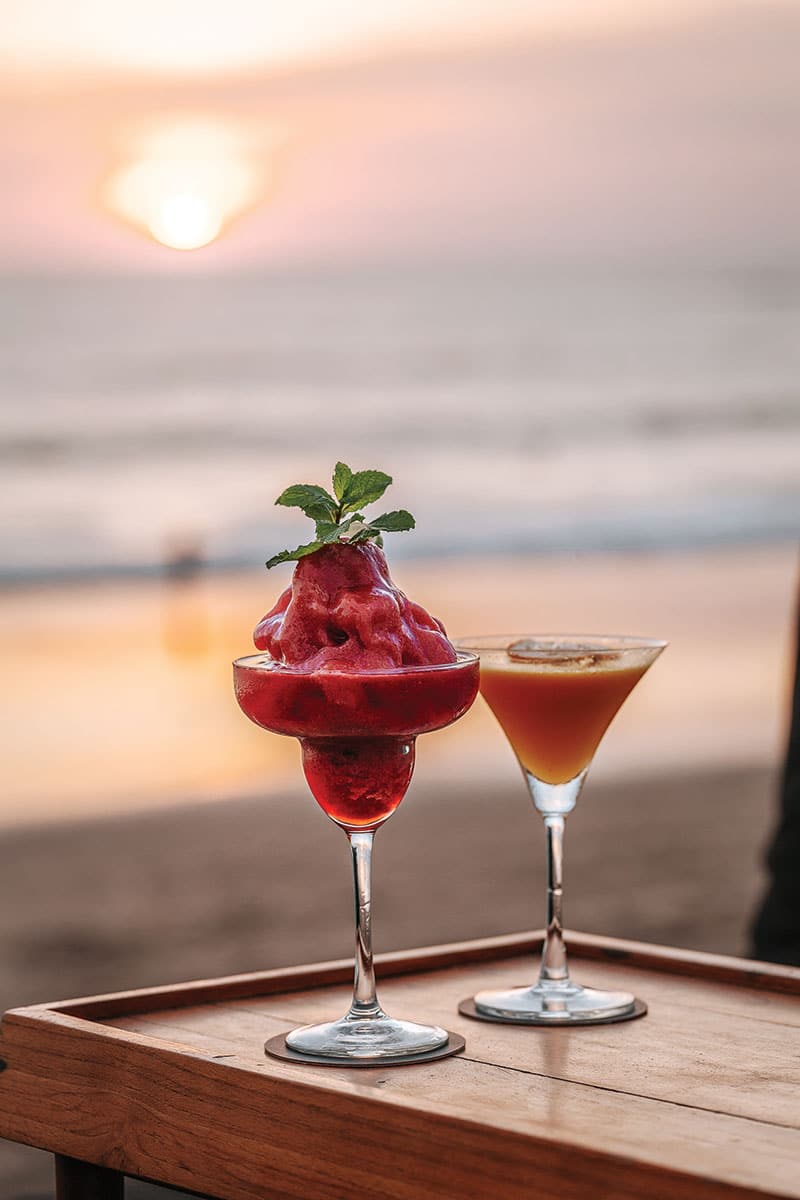 Japanese food doesn’t really need much of an introduction, as most of you reading this story would have tried it at some point, somewhere. It is basically the same everywhere, with small nuances deployed by the particular chefs, but the Japanese cuisine at Finns’ Sushi Bar does stand out in its presentation, quality of ingredients and appropriateness of the location. There is no better cuisine for a beach club. The chefs are well trained from some of the best hotels on the island and they are making as good and fresh Japanese as you would find anywhere. Make sure to try it next time you are lazing your day away at Finns Beach Club.