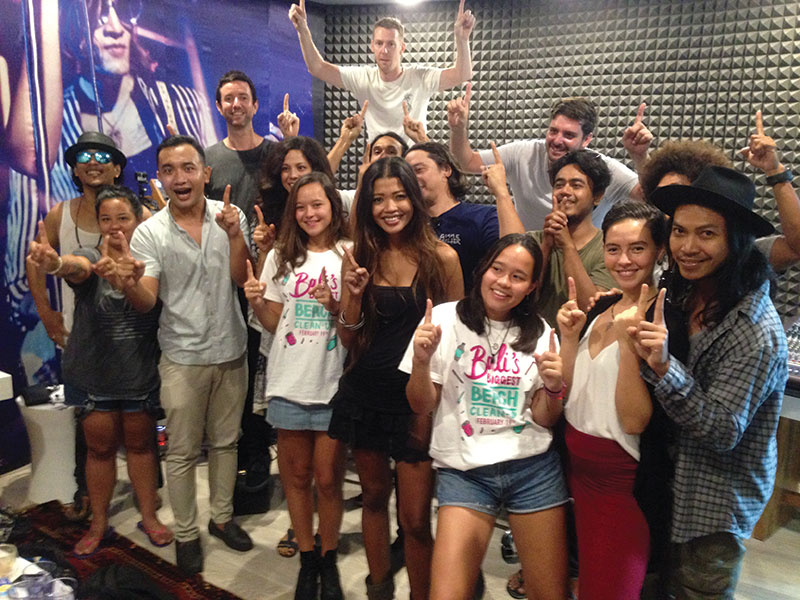 Bali-based musicians – along with several eco-conscious activists – unite to get Bali clean.
Athron is stressed out, but he doesn’t show it. The Bali-based musician from Oz had a busy couple of weeks organizing and recording a theme song for One Island One Voice, the biggest beach cleanup event in Bali that was held last Sunday, February 19th.
“I actually created the song—Satu Pulau, Satu Suara—for my social media project where I created 21 tracks in 21 days,” says Athron. “The song was for day 17, and it came about after a friend tagged me on FB about this beach cleanup event and she suggested why don’t I create a theme song for it.”
And that he did, which only took him a couple of hours from writing to composing the track; an infectious, acoustic popin which his smooth Jason Mraz-like vocals implore us to “leave the island just the way we found her.”Athron debuted the song on his social media accounts, and performed it live for the first time in front of the students at the Green School Bali, where the two initiators of the beach cleanup movement — the precocious Melati(16) and Isabel(14) Wijsen — attend.
“After that, the song kind of took off on its own,” says the singer/songwriter.
From a stripped-down tune now the track has become a full-blown, rousing ballad — Bali’s very own We are The World — now involving several Bali music “royalties”, such as Dankie from Navicula on electric guitar, Adi from The Hydrant on bass, JRX from Superman is Dead and Deny Surya from Dialog Dini Hari on drums, Rio Sidik on trumpets, Iwanouzon keyboard, and of course the “conductor” himself, Athron, on guitar. (Some Jakarta-based talentsare also participating, including Endah N’ Resa, though they are merely present to sing the lyrics for the video clip they’re making for the song.)
Recording at Antida Music Studio, East Denpasar, on a Thursday afternoon, February 16, the creative process involves layering the sound of each instrument one after the other, the veteran musicians given the floor to play solo (in which after each set the others would react in awe), then the composer and the musicians all meticulously fine tune the sound take after take. “Other than being great musicians, I know that these guys are heavily active in social activism and give their time and energy into the right causes,” says Athron of his all-star line-up. “They have their hearts in all the right places.”
Music Speaks Louder than Words
The second day of recording took place at the W Studio at W Bali – Seminyak where now it’s the vocalists turn to shine, featuring ArayDaula, Astika, Dee Wirkus, Diana Rosa, Ian Stevenson, Leanna Rachel, Made J, Robi Navicula, and Sandrayati, all giving their best as they belt it out in the sound booth. The Wijsen sisters were also present to sing as part of the chorus, and, naturally, they were giddy with excitement. “It’s our first time in a music studio, and it’s awesome!” says Melati.
“They just keep adding extra layers to it, and it sounds great,” Isabel chipped in. Everyone seems to agree that there seems to be no better way in spreading the message than through music.
“I just think that it’s a fun way to get to know the beach cleanup event,” adds Melati. “Yeah I mean in general it’s a great way to connect to a larger audience, especially when it has such a catchy tune and a good message,” Isabela says. “It’s definitely very exciting,” says the soulful singer Leanna Rachel. “And it’s wonderful to be part of a movement that offers so much positivity and that aims to turn Bali to its original beauty.”
And, of course, social and environmental-friendly movements are no stranger to Navicula, the self-proclaimed “Green Grunge Gentlemen” that has been a prominent Bali fixture since 1996. “I agree that music is an effective way to spread the message,” says Dankie. “I just hope that this campaign can be a momentum for young people to care more for the environment because the environment needs us.” To which, Athron concludes, “Music speaks louder than words, because it can go straight to the heart,” he says, less stressed now.
Go to Athron’s YouTube channel to listen to the full Satu Pulau, Satu Suarasong and see the behind-the-scenes video of the recording.